Skip to content
Previous
KVM and MST: A Match Made in Heaven

As our daily lives become busier, and we have more tasks to complete, we strive to be more productive.

It wasn’t too long ago that having more than one monitor to work on was considered a luxury. Nowadays, having two monitors is considered, by many, as entry-level. A popular report by John Peddie Research (2017) stated that multiple displays on a desktop can increase productivity by 42% on average, while a study by the University of Utah (2004) showed that multiple-monitor configurations not only increased productivity but also reduce user error by 33%.

But, improved productivity is only beneficial if the environment you are working in is safe and comfortable, and you have instant access to all the resources you need.

That is where KVM extenders come in.

Put simply, KVM extenders allow you to work on a PC from a distance. Picture this, you are working in a hazardous power plant and the PC you need to access is sited in a plant room, close to the gas turbine. You cannot enter the plant room without permission or special equipment and instead are based in the safe control room away from potential harm. But, smooth running of the operation relies on you having real-time access to all the data and updates stored on that PC, at any given time. A KVM extender is based upon a transmitter and receiver set. The transmitter is connected to the source PC and captures peripheral signals and data. These signals are then extended to your desktop where the monitors, keyboard and mouse are powered by the receiver.

Now it has been established that multiple-monitor setups can increase productivity and KVM can facilitate a better working environment, let’s talk more about DisplayPort MST, and how can it be combined with KVM extension technology to create a match made in heaven.

Back in 2010, the world was looking to miniaturize technology. Smartphones were judged on how neatly they fit into the palm of your hand and laptops were idolized on their lightweight and slimline frames. But with smaller devices, came fewer ports. Users were finding it increasingly difficult to find devices with alternative ports like VGA, DVI, HDMI and computer cables so the Video Electronics Standards Association started developing MST technology to facilitate the extension of your desktop across various screens using a single DisplayPort™ cable. Since entering the market in DisplayPort 1.2, the protocol has become a trusted industry standard used by many organizations across different industries.

Fast forward a decade, as the demand for higher resolutions and increased productivity is at an all-time high, MST technology is being hyped as the future-proof solution for extended desktops around the world.

So, what does MST do?

MST allows multiple independent displays to be driven from a single DisplayPort source device. The displays can either be connected to the source device via an MST hub, or to each other in a daisy-chain configuration using a single DisplayPort cable to link them. By daisy-chaining the displays, you can extend content across all monitors which delivers advantages across a variety of applications.

Why combine MST with a KVM extender?

Well, KVM and MST kind of go together like Bonnie and Clyde, Strawberries and Cream or Lennon and McCartney. They both give you uncluttered simplicity, a cost-effective way to better visualize your data and ultimate flexibility at the desktop.

We all know how multiple screens positively impacts productivity but being able to drive them in a simple and cost-effective way is a must. The main advantage of using MST to operate multiple monitors is simplicity. Using just one DisplayPort cable, one video output, and a standard graphics card, you can visualize your HD data across multiple screens. Using a KVM extender with in-built MST is a more cost-effective way to access high-resolution visuals while decluttering the desktop. A standard quad-head KVM extender would generally be costly, and on top of this you would then need a specialist graphics card that supports multiple monitors. With an MST KVM extender, you only have a single video output source meaning these investments disappear. A huge reduction in the number of cables means less set up time is required, and there is no need to invest in time and money to buy and install a specialist graphics card, instead using the one you already have. More so, KVM with MST is truly flexible. You can use as many monitors as your GPU and KVM solution can drive and you are not tied in to one particular monitor, as long as they are MST compliant.

What does Adder know about extenders and MST?

Gone are the days where you need to purchase a costly PC, several monitors, specialist graphics cards, an abundance of cables – and then spend days swapping out infrastructure in order to connect them all. With the new ADDERLink XD614 you can simply plug in the product, which by the way works with either a fiber or copper connection, run through some short configuration and away you go. Real-time, ‘at-the’PC’ control, with HD clarity, on up to four monitors, from a remote location. 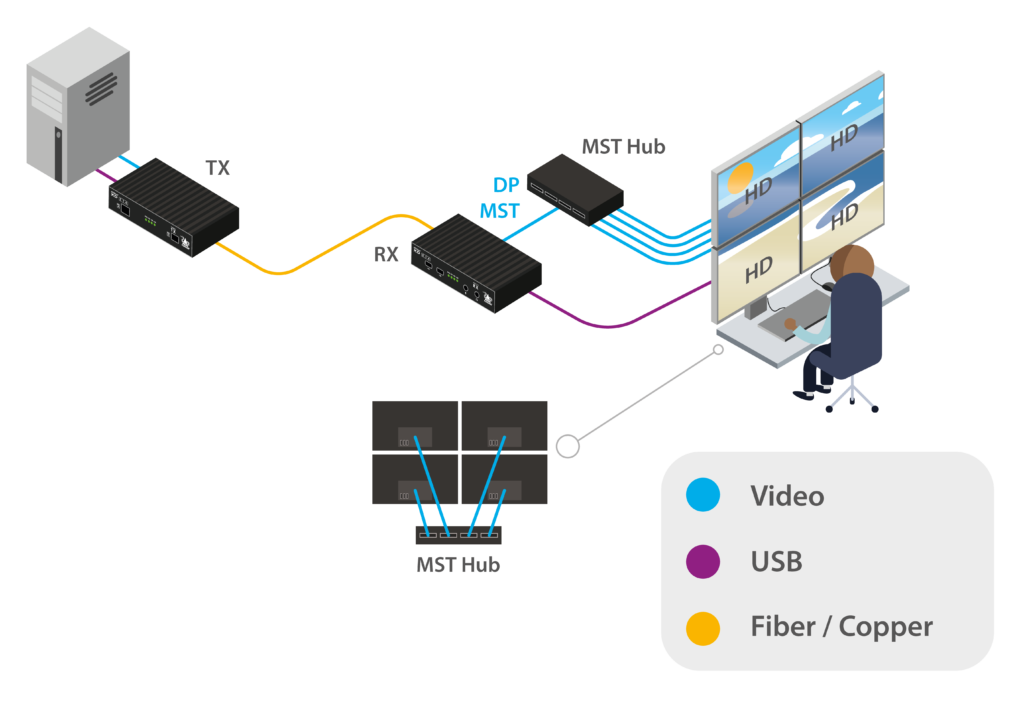